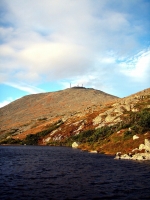 Join us for the documentary film “Stories from Mount Washington.” New Hampshire filmmaker Bill Millios and Back Lot Films has created a short documentary on some of the important, but perhaps lesser known characters that make New England’s highest peak one of the most well traveled in the world. The film is based on Dan Szczesny's book "The White Mountain" and takes a behind the scenes approach to how the book was compiled and researched. Bill and Dan will be on hand to introduce the film and will present a panel afterward for discussion and questions and answers. Film is 40 minutes long. This event is free and open to the public.